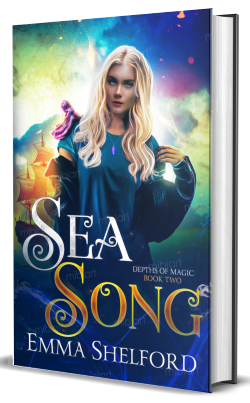 Sea Song
Depths of Magic #2 by Emma Shelford
Chapter One
One day, I wouldn’t have to come when he called. But that day was not today.
I ground my teeth and waited with crossed arms outside the warehouse door. Gulls yowled and circled in the darkening sky overhead, a portent of stormy seas to come. Wind fluttered the surface of the Fraser River which flowed wide and slow at its mouth.
I could have ducked out of the breeze and taken shelter within the warehouse. The entryway was warm and welcoming, with a cozy couch and a cheery greeter willing to help with anything—for a price. I hunched my shoulders, unwilling to visit the scene of my first port of call after escaping my former home under the sea. The Seamount had been controlling, but Branc and his warehouse’s façade of comfort were worse.
Besides, I wasn’t cold. My siren blood took care of that.
A car roared into an adjacent parking lot, and I flicked my eyes over to regard it. It was (type of car), and I recognized it as Branc’s. My stomach flopped. What assignment had he called me here for? He’d been silent for weeks, and I was desperate to pay off my debts to him. He didn’t know how close I was to paying him off—a stack of cash under my bed was waiting for the day when I could pass him the entire amount I owed him—but without Branc’s assignments, my ability to earn extra money was limited.
Branc slammed the door and sauntered over to me. Some might find him attractive, with his smooth black hair and defined features, but I couldn’t see past his stranglehold over my life.
“You’re here,” he said when close enough to speak without shouting. “Good.”
“You called, I came.” I dipped a mocking curtsey, something I’d picked up from a movie my friend Byssa and I had watched last week.
Branc narrowed his eyes at me but didn’t comment on my antics. “I need something from a colleague, but he’s proving less than helpful. You’re the distraction while I fetch it.”
I played with my lip between my teeth while I searched Branc’s face. The mission didn’t sound too bad, as far as Branc’s assignments went. My stomach squirmed with unease.
“We’re stealing something,” I said. “What is it?”
“It doesn’t matter to you.” Branc crossed his arms with an affected expression of nonchalance. His tense shoulders told a different story. Whatever we were going to steal mattered a great deal to Branc, and he was worried about something. “Will you do it?”
I stared at him for a moment.
Branc huffed a sigh. “Do I need to remind you of the sizable debt you still owe me? I’ll pay you four packages of Grace for tonight. I don’t mind collecting your interest payments, but you might see it differently.”
I scowled. I hated his hold on me, but I couldn’t see that being party to stealing whatever Branc wanted was so terrible. And four packets of Grace? The slices of sea anemone endemic to the Seamount gave sirens the ability to be so much more underwater. Four packages was a powerful incentive, whether I used it to pay Branc or ate it myself.
“Yeah, I’ll do it.” I pushed off the warehouse wall and stalked to Branc’s car. “You’ll need to drive me, though. I don’t have a car.”
​Like this sample chapter of Sea Song? Then pledge on the Kickstarter today!
LEARN MORE