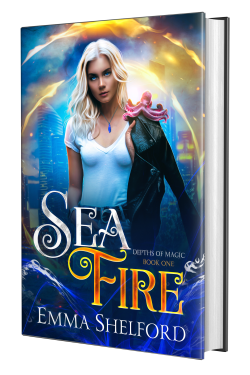 Sea Fire
Depths of Magic #1 by Emma Shelford
(A sneak peek just for you!)
I jogged through the aquarium, my backpack thumping against my side. Around a dim corner behind a large shark tank where dogfish circled in never-ending loops, I opened a "Staff Only" door and slipped inside. Gurgling sounds echoed through a narrow hallway, and colored pipes covered the entire side wall.
I sidled my way to a corner and stepped onto a foot ledge to peer over the edge of the short wall. Open water bubbled before my eyes, glowing a garish turquoise that I had never seen in real waters. I looked up and down the hallway. When I was satisfied with my solitude, I pressed my face into the water and let out a clicking call.
Before I had fully wiped my face dry, a small octopus the size of my two fists together had emerged to twist sinuously on the surface. His textured skin changed from mottled brown to pale gray and then to patchy orange. I grinned with the first happiness I'd felt since my encounter with Branc last night.
“Hi, Squirter,” I whispered. “Time to go.”
I took out the insert of my backpack, unscrewed the top, and lowered it into the water. Squirter climbed in, and when all eight squishy arms were safely tucked in the container, I screwed the lid on and hauled it out of the water and into my backpack. The familiar weight rested on my shoulders, and I directed my feet to the exit.
I had met Squirter a few months ago. He had been so curious and playful that I’d immediately fallen in love with him. With my abilities, I could understand his emotions and the direction of his thoughts, such as they were, and I gathered that his sense of adventure was more finely honed than the other octopuses he knew. I was different and interesting, and he loved to follow wherever I swam.
He'd followed me around, as frisky as the puppies at the dog park near my work. Before long, we were firm friends. He'd wanted to see my dry-land world, so I’d cut out a milk jug and hauled him home to my bath. He made the dingy apartment feel like a home instead of the prison it was.
I hummed soothing thoughts of the ocean to Squirter as I walked. He could feel the vibrations through his container, since my back was pressed against it. We were due for a swim after my meeting, and Squirter’s happy hum echoed my own.
Every day I worked, I took Squirter along and popped him in a safe tank at the aquarium. It was our version of doggie daycare, and Squirter loved exploring the different environments. We avoided the shark tank, but otherwise, Squirter was wily enough to survive any new fish he encountered.
Once outside, I strode along a wide sidewalk through Stanley Park, where the aquarium was located. Children’s shouts and the whisk of bicycle tires on pavement filled the summery Saturday afternoon. Large, leafy trees overhead swayed in the warm breeze like kelp in the waves. My eyes closed when the smell of salt wafted past me on the ocean breeze. I must have hummed my longing because an answering vibration from my backpack tickled my spine.
I couldn’t swim yet, though. Mark was waiting.