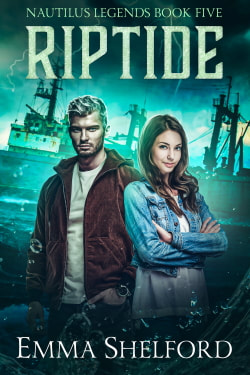 Riptide
Nautilus Legends #5 by Emma Shelford
Teaser
The ocean called to him. He only wished it wasn’t quite so loud.

Zeballos Artino rubbed the skin on his arm then gripped the steering wheel of his boat and gritted his teeth. The rolling waves out in the middle of the North Pacific Ocean were large enough that the Clicker needed his full concentration to navigate over them. It was a gorgeous late September day, hardly a cloud in the sky, and Zeb squinted his pale gray eyes at the beauty of the boundless, glittering ocean before him. But ignoring his failing body’s needs was difficult.

He finally gave in and groped on the wheelhouse’s counter behind him. His fingers finally grasped a small tub, and his whole body clenched with anticipation. Quickly, he screwed the white tub, keeping his wrists firmly pressed on the wheel. He dipped the fingers of his right hand deep into the thick, greenish cream inside and smeared it on the inside of his left wrist.

Zeb held his breath for twenty seconds of agonized anticipation, then a sensation of blissful calm filtered through his body. His shoulders relaxed, and he screwed the tub’s lid back on with a contented smile. The cream was the only thing that staved off his worsening symptoms, that and swimming. It wasn’t a cure, but it sure helped make his days more bearable.

Zeb was dying. The same wasting disease that had robbed him of his mother at age eight now held onto Zeb’s body with unrelenting talons. The cream was a palliative, nothing more.

But today, maybe that would all change.

Footsteps in the hallway behind Zeb’s chair resulted in a petite brunette bouncing into the wheelhouse. Zeb’s face broke into an involuntary smile, as it often did when Corrie Duval entered the room. Her bubbly good nature, zest for life, and enthusiasm bolstered Zeb even on his lowest days. He was lucky to have her around.

“Are we getting close?” Corrie leaned over the chart spread over the dashboard and tucked a loose strand of hair behind her ear. Zeb wished he had done it first, but ever since he’d kissed her last month then passed out, he hadn’t trusted his body. Besides, was it fair to Corrie for a dying man to make a move on her?

“I marked the location with a penciled star,” he said. “I checked it against a map of underwater seamounts. It’s the closest one to our location where my mother’s directions led us.”

And where Penelope Stroud died, and a giant fish called a dascor almost sunk my boat, he added in his head. Last week’s battle with the grief-stricken scientist hellbent on destroying the underwater home of his mother’s people was still fresh in his mind, but he didn’t like reminding Corrie of the death and destruction wrought by their quest to cure Zeb.

“And we’re about here now?” Corrie pointed at a spot on the map, and Zeb nodded. “So really close. Good. It’s been a long trip. Are you ready to dive down? Do you know what you’ll say? What’s the exact plan? What if you don’t come up again? How long should I stick around?”

Zeb wanted to smooth the worried creases in Corrie’s forehead with his hand. Instead, he tried his best to assuage her fears with words.

“I’ll dive down and have a quick look first.” He infused his words with a confident tone. Hopefully he was fooling Corrie, because he wasn’t buying it himself. “I’ll let you know what I see. Then we can decide from there. And if I don’t surface…” Zeb’s voice trailed off, then she shook his head and continued, “If I’m not back on the boat by three o’clock, you turn this bathtub around and head straight back to Victoria. If it gets dark before you get home, radio the Coast Guard and they’ll help you out.”

“But what about you?” Corrie’s voice was carefully level, but a catch in her throat belied her attempts at calm.

“I’m a dead man anyway.” Zeb’s mouth twisted in his best attempt at a reassuring smile. His muscles didn’t want to make the motion. “This is my last-ditch effort to find a cure. If I can’t contact my mother’s people, and if they don’t have answers, then I’ll be gone in a week or so anyway.”

Corrie crossed her arms and looked out the windshield, blinking furiously.

“Fine,” she said finally. “That’s the plan. I’ve got it.”
​Like this teaser of Riptide? Then pre-order on your favorite retailer today!
PRE-ORDER